January 2020, it was already our second trial to film the “Baptism of Christ” ceremony (“Epiphany”) with the patriarch Theophilus III. of Jerusalem on the Jordan River.

When our team traveled there in 2019, there were so many unpredictable problems, like all the time when you want to shoot holy events in the Holy Land. 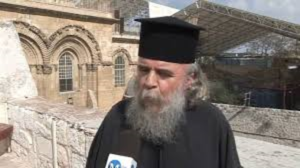 As always for any of our filming in Jerusalem, we have received all of the necessary documents from the secretary of the Jerusalem patriarch Theophilos III, His Excellency Archbishop Aristarchos. These would enable us to film the patriarch from the right angle on the Jordan River.

Due to our unpleasant experience in the past, I already knew that there were some problems to expect. On January 18th, 2019 it was high water and so, Darko, our cameraman, and I had to wait for hours in the cold water for the arrival of the patriarch Theophilos III. and his delegation. 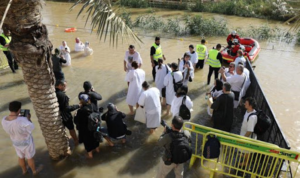 Waiting for the patriarch

The patriarch had announced. Immediately the hectic was rising and the security kindly asked everyone to leave the film location, so Darko and I were roughly pushed into the corner, when the patriarch and his delegation were already on the stairs that go down to the River.

His Excellency Archbishop Aristarchos, the patriarch’s secretary, saw Darko and me in this difficult situation, so he came back 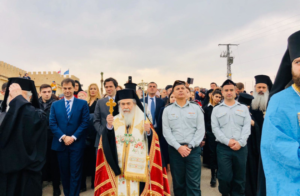 Patriarch Theophilos III with the delegation

took my hand and pulled me through the security guards who have formed an impenetrable circle around the delegation. Again, I reached for Darko and pulled him to the river, where the patriarch had already started the ceremony. Despite the active intervention of His Excellency, Darko was still pus¬hed back by the security guards. I managed to get through them just because His Excellency pulled me with his hand right behind his back. When the patriarch finished with the blessing of Jordan, I had to film the most important moment of the day. Unfortunately, the amount of filmed material was not enough to cut a good piece.

But it was not in our nature to give up so easily!!! Thus, I decided to film again in January 2020!

This year – typically German- I tried to prepare even better, so nothing could go wrong: a Moleben (petition service) was held in Berlin, the filming permit was there, the transport was organized, a day of research in Jordan was planned, the team, Darko and I were ready with two cameras, and our assistant Maik stayed by our side. 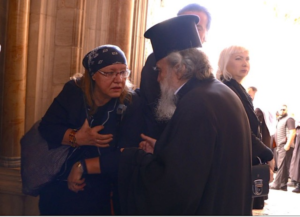 However, already during the research in Jordan I felt that something could go wrong. It was high water again, but so high that even the visitor platforms on the Jordan side was completely disintegrated swimming under the water. At this moment, the original plan to film with a camera from the Jordanian side literally fell apart!

But wait, not giving up yet! So, we decided to go along with the Patriarch and his delegation. We assumed that the patriarch would do the blessing of the water again from the boat, so we were in a hurry to organize Darko’s rubber shoes in “extra large” size, which is not easy, so he could straight into the water with the camera. 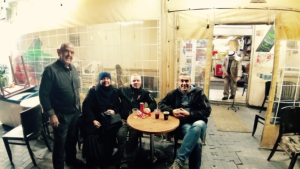 The team (Maria, Maik and Darko) recovers with Arabic coffee

The good start gave us a hope. I was already looking forward for the breathtaking pictures that we could take while the patriarch was moving through the desert to the Jordan with the ever-increasing delegation. Last year we could not take these pictures since due to the security reasons we had to wait at the riverside 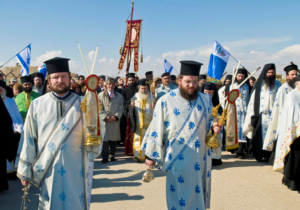 In a matter of seconds, the crowd merged with the patriarch’s delegation. It got tight, very tight – so tight that there was a real danger of panic. His Excellency held me again to help me to stay within his inner circle. I asked Him to hold not me, but Darko. He tried that too, but security had the last word again. 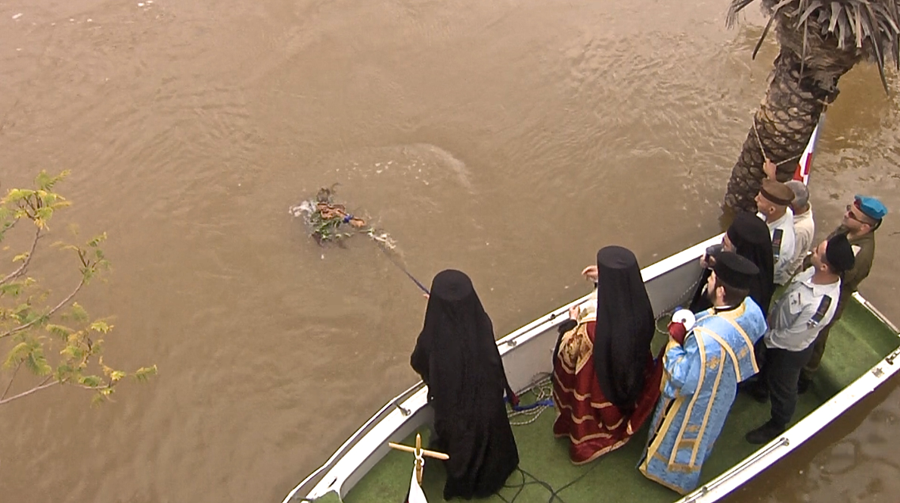 We could only stare on the giant screen when the patriarch threw the cross from the boat into the river for the third time, while blessing the waters of the Jordan, that has been sanctified around the whole world during that day. We could hear the loud cries of joy from thousands of people around us. We felt so exhausted and just silently set down on the two empty chairs, stared at the crowd and did not speak for half an hour. Everything was screwed up! We didn’t make it again! 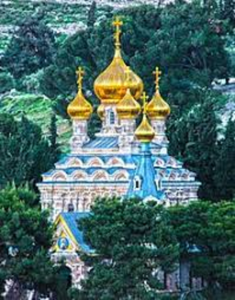 What have I done wrong? What did God want to tell me? I could not let all of these thoughts go. On the way to the airport, we still attended the church service in the Maria Magdalena monastery on the Mount of Olives.

Mother Katharina took us to the gate. The sky reflected the sadness in my heart. It’s raining in Jerusalem!!! Suddenly she bended down and picked up something up from the wet floor. Since I was so in my thoughts, I could not see what it was. Then Mother Katharina turned to me and said: “Look what I have just found at our feet”. She gave me a little wet icon of Saint John of Shanghai. On the back I read: With the blessing of the relics of Saint John of Shanghai and the miracle worker of San Francisco! Mother Katharina beamed at me: “This is a greeting from St. John to you! Don’t worry so much, let God help you, trust in HIM!”

Incredible, but 30 minutes later I received exact filming material that I was missing. 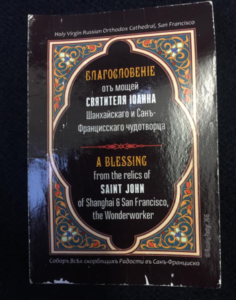 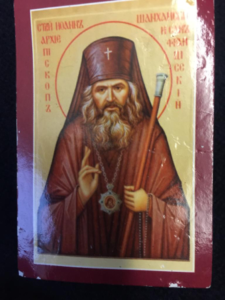 News
This Christian film project is financed exclusively with your donations.
Any support is welcome. May God reward you! more..